For parents who want to know more about the background to concerns about Gavin Boyd’s triple-jobbing influence the following article published by The Belfast Telegraph on 22nd December 2008 is worth reading. Note also the two published comments that follow the article. 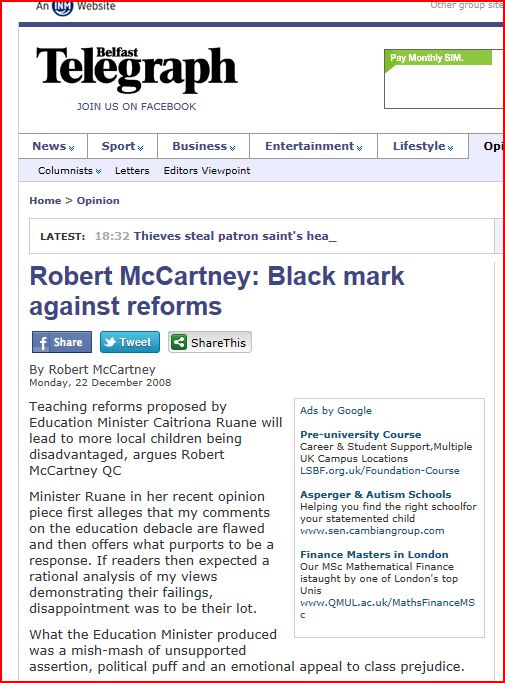 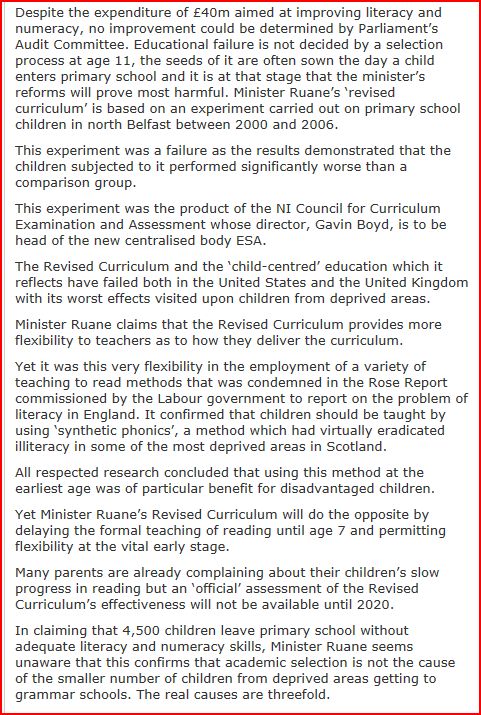 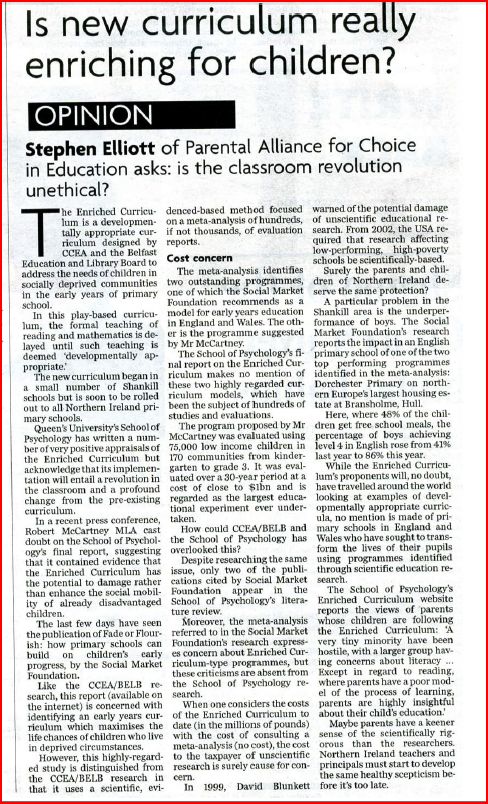 Since the Enriched and Revised Curriculum projects had their genesis in Northern Ireland it is striking that the N.I. Education and Training Inspectorate (ETI) have missed an important opportunity to improve their public confidence level.

It has taken OFSTED, their equivalent in England, to raise public concern about the damaging effects of curricular changes.

Inspectors warned that the changes had prompted confusion in some schools.

A “common feature” of less successful schools was that teachers were “left to interpret the curriculum as they saw fit”, meaning it “lacked coherence”.

Some 24 out of 84 schools introduced “integrated courses” covering all humanities subjects. A similar approach was taken in the teaching of citizenships and PSHE (personal, social, health and economic education).

But Ofsted said inspectors “identified emerging problems with the courses”.

“These included the loss of subject content and subject skills development, lack of continuity from primary school, lack of rigour and challenge, uneven quality of teaching and artificial ‘links’ or themes”, said the report.

However in Northern Ireland evangelist educationalists who spend more time appearing on the media than in the classroom peddling claptrap suggest all is well.

Parents may disagree but there is no refund for a failed education.

Except in Northern Ireland where constructivist education zealots experimented on vulnerable pupils using an “enriched Curriculum” to ensure that “the rich got richer while the poor became poorer”. The experiment failed but the researchers escaped without censure.

What is most interesting in the latest statistics is that the boys who do worst are those in isolated, inward-looking, deprived working class communities.

The real reason, I suggest, for working class boys having lost almost all interest in education is that their two chief motivations for achievement were systematically removed from the primary school curriculum: competition and a clear sense of measurable, structured accomplishment.

So determined was the education establishment to ensure “equality” in the classroom, that it banned any reference to winners and losers, to high achievers and lower ones, to being the best or the poorest in any capacity. So the thing that spurred on many boys to excel – the idea of being “top of the class”, or the best at maths, or the prize-winning reader – has now been eradicated in the very schools (those in deprived areas) where it is most needed. And thrown out along with this will-to-win, were the clear, identifiable signs of goals having been reached: in order to avoid any child feeling that he had failed in relation to his classmates or his teacher’s expectations, the steps to progress were obscured and the expectations lowered.

There was no longer any way for children to be rewarded for climbing the rungs of a ladder. “Learning through play” meant that the accomplishment of learning itself could be disguised in a way that would conceal who was quicker to learn than whom. If working class boys are to regain any sense of education being worthwhile, the schools will have to offer them prizes and accolades when they do well, and encouragement to join the race when they fall behind.